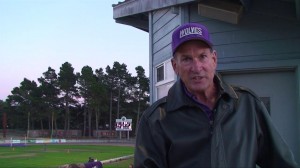 On Friday March1 at 8:00PM at the Mendocino TV studio, in the historic Union Lumber Company Store, as well as live streaming on the internet at www.mendocinotv.com.
Hosted by Doug Waldo, an award winning interviewer, Mendocino Media Makers is a unique, interactive series where the public can participate by attending as a live studio audience member or through logging into the station on the internet.
Lindy Peters has had a successful career on the coast over the last 30 years ranging from being a radio disc jockey, a politician, the voice of the Fort Bragg Timberwolves, a musician, an interviewer, to being an active community volunteer. His diverse talents and extemporaneous wit have made him a beloved community character.
“I have had the privilege of working with Lindy over the years in many capacities”, said Terrence Vaughn, CEO of Mendocino TV. “Not only is he a fascinating and funny guy, you just never know what he will say next, so this will be an exciting event”.
In addition to watching the interview, people can also call, e-mail or ask their questions during the audience participation segment. With the internet television capacity, viewers can watch and interact from any place in the world.
For more information, please call 707- 964-0101.

Lindy received a B.A. in Dramatic Art from UC Santa Barbara in 1975 and promptly bought a one-way ticket to Maui where he lived for two years before returning stateside to go back to school. He earned an A.A. in Broadcast Journalism from College of San Mateo and began his radio career in 1979. In 1983, he became the morning-man, and for 28 years he manned the microphone with his many character voices and extemporaneous wit. Lindy is, once again, the voice of Timberwolves sports and announced last year’s championship football season.

Also appearing on this show is Lorry Lepaule

Lorry has taught youth drama classes for the Jumpstart! theater program for the last six years, and has taught acting and stage movement for Gloriana’s Musical Theatre Workshop for Young Performers for the last three years. Also for Gloriana, she directed the Young Performers’ most recent musicals: The Aristocats, Willy Wonka and the Chocolate Factory, Jr. and last year’s Alice in Wonderland, Jr. She is an actor in Mendocino Theatre Company plays and currently teaches at Montessori Del Mar learning center.