with 5 new stakeholders in Fort Bragg’s Gateway status on

Fort Bragg California as one of just six communities to earn “Gateway Community to the California Coastal National Monument” status.

On Monday, October 19, 2009, a female Blue Whale washed up on the Mendocino Coast.

She was 73 feet long and weighed approximately 70 tons.

She ran into the propeller of the research vessel Pacific Star in the open sea.

in the Presbyterian Church Fireside Room to a sold out crowd

Played in the Presbyterian Church’s Preston Hall to a sold out crowd. Dave gave new meaning

Sound was mixed and recorded by Peter Temple

Edited in the Redwood Coast Media Center by MendocinoTV

In Celebration of The Mendocino Coast 30th Annual Whale Festival.

Caito Fisheries donated 30 pounds of crab per chef and they stepped up to deliver.

Wineries poured their specialties and the crowd was better than ever.

On Thursday December , 2011 the long awaited re-opening of the

Fort Bragg Skate Park was held to a throng of enthusiastic skaters.

This second stage came about much sooner than expected thanks to

We Love Soaps is proud to announce Sundays The Series Wins!

in the tent at the Mendocino Music Festival 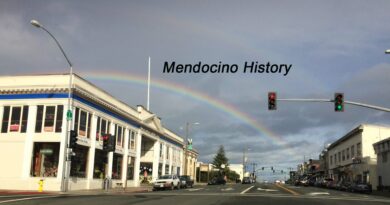