Listen to KUNK for live webcast of the Fort Bragg vs Arcata game at 7pm on Saturday Nov. 17th

Tyler Ashby threw a pair of 45-yard touchdown passes and the Fort Bragg defense kept visiting Piedmont from scoring as the Timberwolves advanced to the second round of the NCS Division 4 playoffs with a 14-0 victory Friday night.

Playing on a wet field, Ashby hooked up with Brandon Palmer in the first quarter and then found Ty Vaughan in the third for the game’s other touchdown.

Fort Bragg dominated on both sides of the ball. The offense gained 480 yards and ran 68 plays, while the defense held the visitors from the West Alameda-Shoreline League to a handful of first downs.

“We got inside their 10-yard line several times and failed to score. That was frustrating, but the defense continually made them go three-and-out. Defensively, we were far too physical for them.”

Junior running back Zach Smith had the bulk of the Timberwolves’ offensive yardage. He gained 255 yards on 35 carries. Ashby picked up 80 yards on 18 carries.Fort Bragg, the bracket’s No. 5 seed, will next play the winner of Saturday’s game between No. 4 Arcata and No. 13 Moreau Catholic.

The Timberwolves, champs of NCL I, will take a nine-game win streak into the game. Their overall record is 10-1.

Piedmont ends the season with a 5-6 mark. 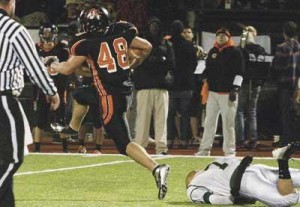 The Dave Filippini-led Tigers are riding a nine-game win streak into the playoffs!

The Tigers — sporting the black and orange –are averaging nearly 33 points on offense. The Arcata defense has given up an average of 15.2 points per contest.

ARCATA — An unexpected source got the Arcata High football team going. Then, the usual suspects took over to sink Moreau Catholic.

And what was going through Madero’s mind as he booked it down the Moreau sideline and into the end zone?

It was quite the turnaround for the Tigers, who had just seen the Mariners’ Jason Hinton return an interception 30 yards for a touchdown.

The unpredictable turn of events was exactly what Arcata needed.

“It definitely got us going,” senior running back Aleric Stone said of Madero’s kickoff return. “Anything we do on defense or special teams we take out with us on offense.”

Stone had 17 carries for 238 yards and touchdown runs of 16, 27, 28 and 80 yards, routinely going up the middle and breaking loose in the secondary.

“We got him to adjust to some off-tackle stuff tonight,” Filippini said of Stone. “Aleric was fantastic. He ran like he was possessed tonight.”

Stone’s backfield mate, junior Tyler Keil, had touchdown runs — both on toss sweeps — from 13 and 54 yards out during Arcata’s first-half barrage. He finished with 146 yards on just 12 carries.

“We studied our film, looked for our places and tried to take advantage against a team who was stacking nine in the box,” Filippini said. “Then it was just kind of the same formula we’ve been using all year.”

All of the Tigers’ yardage came on the ground, with quarterback Chad Blickenstaff’s lone pass being the interception return in the first quarter.

“Arcata’s a very good team,” said Moreau Catholic coach Andrew Cotter, whose team finished 5-6. “The way they run the ball, they’re going to be a tough team to beat in Division IV. We had some things go against us and it’s tough to overcome stuff like that.”

Hinton added two touchdown runs of 60-plus yards in the third quarter. He finished with 133 yards on the ground on 12 carries and caught two passes for 42 yards.

“He’s our guy,” Cotter said of his sophomore running back. “He’s going to be playing this game for a long time.”

With their 10th consecutive win, the Tigers advance to the Division IV quarterfinals and will host No. 5 seed Fort Bragg next Saturday at the Redwood Bowl at 7 p.m. Fort Bragg beat 12th-seeded Piedmont 14-0 Friday night.

Fort Bragg has a racist history