farmers are now allowed to sue Monsanto for contamination of their fields. It was a partial victory,

You can sign up for the Mendocino parade at : http://www.momsacrossamerica.com

I will be borrowing a shopping cart from the local Food Bank.

Healthy Eating and GMO’s in the News

“Today’s ruling may give farmers a toehold in courts regarding the unwanted contamination of their crops,

but it does not protect our food supply from the continued proliferation of Monsanto’s flawed technology,”

said Dave Murphy, founder and executive director of Food Democracy Now!, a co-plaintiff in the lawsuit.

which may jeopardize US wheat sales to Japan worth between $300 – $500 million dollars.

The Organic and Non GMO Report

thus eliminating a non-GMO alternative for food manufacturers and consumers.

This Friday there will be a free showing of Jeffrey Smith’s film, Genetic 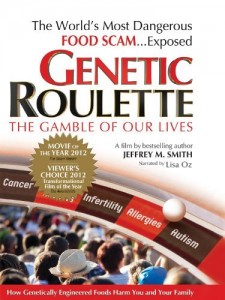 Be informed about GMO’s. You can watch Jeffrey’ Smith’s movie, Genetic Roulette for free on June 15, 2013.

If you are unable to watch it on your computer, it will be shown sometime in the