Damage to a fiber optic cable on the Comptche Ukiah Rd cut off digital communication to large parts of the Mendocino Coast. 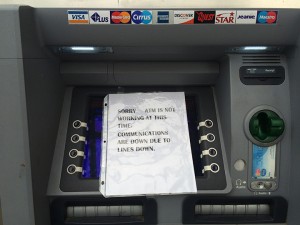 Verizon Cellular Service was out of service as well as Mendocino Community Network’s Fusion / Sonic service. Digital Customers of AT&T such as Little River Inn and Comcast lost voice and data capabilities affecting their clients. Banks and Health Clinics, Dentists and Doctors saw over 40 hrs of lost service.Whole communities were isolated as their fiber fed remote terminals failed. The ripple effect of this outage was felt across the whole spectrum of the coastal community.

Today, August 3, starting at 5:20pm, links serving Fusion/FlexLink customers in the Fort Brag and Mendocino areas went down. We are currently investigating the issue and will update as soon as we have more information.

Update: A traffic accident in Mendocino caused a fiber cut that appears to be the root cause of this outage. Still no ETR, but we will update as more information becomes available.

Update: AT&T has found the cable cut and has dispatched to start repairs. They will attempt to pull slack in the cable in order to restore service tonight, however there is no ETR until the extent of the damage has been fully assessed.

Mendocino TV telephone couldn’t call repair or 911 or anyone at home and at the Television Station, both Sonic lines.

My partner’s Verizon cell phone went to extended network and she couldn’t receive calls. Calls went to her voicemail.

My U.S. Cellular iphone worked for well voice and data. After remembering to dial the area code for all calls on a Verizon extended network, we established communication.

Mendocino TV drove to the damage site and interviewed the linemen in the manhole attempting to assess damage. To quote 1 of them, “It’s damaged in at least 4 places including this right angle kink in the manhole”, showing me where the fiber was in an unnatural bend that was obviously shattered. “We’ll do a temporary fix in the morning after we round up the fiber” “We don’t have any spare stock of this fiber in the yard, we’ll have to bring it in from somewhere else.”

Update: A splice team is on site with an ETR of 7:15am

8:17 Mendocino TV checked with Mitch Sprague at MCN for their status.

Mendocino TV texted Lindy Peters at KUNK doing the morning news an update on the situation;

Update: AT&T has encountered trouble while restoring service with a new ETR of 10:45am

Update: AT&T splicers are still working in an effort to restore service, currently no ETR

Mendocino TV returned to see the extent of the damage in the daylight. I was able to get the Media Contact telephone number from the AT&T District Manager. He was not going to do any interviews.

Splicer wasn’t getting continuity and blamed poor record keeping. He was going to have to id each fiber separately.

Update: AT&T has discovered that the affected fiber cable was damaged in more than one place. They are currently working to repair the additional damage.

Update (9:25pm): AT&T has notified us that they are currently working on our fiber spans

Update from MCSO: Fiber is still down. Mendocino County Sheriff will have 24 hr coverage on the coast tonight. Firehouses in Mendocino and Albion- Little River will be staffed with emergency personnel tonight.

Update (2:53pm): Service appears to be restored, however we have not received confirmation from AT&T that our circuits are stable. We will update again as soon as any additional information is available.