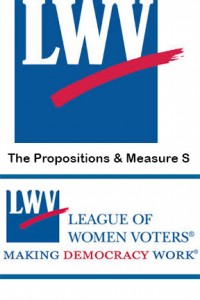 On Tuesday morning, the League of Women Voters held an informational forum on propositions and measures which will be on the ballot in the upcoming election. Jane Person and Jerry Stavely headed the forum, providing detailed information on Propositions 1, 2, 45, 47, 46, 48, and Measure S. The information included the issue each proposition posed, a synopsis of each issue, who the opponents and supporters are for each and how much funding they have procured to date, and arguments for and against each issue.
Person and Stavely noted several websites to help voters navigate the details, pros and cons, of each measure. Ballotpedia.org is one they highlighted. Though they both did a heroic job of dissecting the convoluted language of several propositions, some points were still difficult to nail down.
Proposition 1, the Water Bond, would enact the Water Quality, Supply, and Infrastructure Improvement Act of 2014. Stavely provided some history on the bond, informing listeners that this measure was originally Proposition #43. He noted that between 1996 and 2006, other propositions for water related bonds had been passed, and that around 11 billion dollars has been put into water bonds. The current water bond would entail selling 7.12 billion dollars of new bonds for water projects to increase water supplies such as dams, public water system improvements, drinking water protection, water supply management and conveyance, wastewater treatment, drought relief, and protecting and restoring watersheds. The measure would also call for redirecting unused money from prior water bond acts, for same purposes. 5.7 billion dollars would have to be matched from non-state sources.
Stavely pointed out that none of the funding may be used for a canal or tunnel, as Governor Jerry Brown had proposed in his Twin Tunnel project, to transport water from Northern California down to Southern California.
Supporters argue that the Water Bond would be the most fiscally responsible plan, will help the economy and protect the environment.
Opponents argue that this bond contains “pork barrel” projects not in the state’s interest, that the public will have to pay for adverse effects of private interests, and that it does little to mitigate the drought situation facing us today.
The bottom-line: In order to service the debt on the Water Bond, the state of California would be paying 360 million dollars annually for the next 30-40 years.
This bond has the support of both major political parties and other groups including the California Farm Bureau, Audubon Society, and the Nature Conservancy. Those in opposition include various sports fisherman organizations, Environmental Water Caucus, Center for Biological Diversity and the Winnemem Wintu Tribe.

Jeff Clements on “The Shift”

The Shift on Measure S with Paul Cienfuegos