Hearing was held in Caspar but no one was listening

The Rainforest Alliance, a timber industry certification agency held a small public hearing at the Caspar Community Center on Tuesday August 8th. Confronted with a group of  community activists and concerned citizens, including members of local firefighting organizations, the Rainforest Alliance presented the most cursory and brief a hearing as they could. Mendocino Redwood Company’s John Anderson made a very short presentation where he basically invited anyone who wanted, a guided visit to any part of MRC  holdings they chose.

The local stakeholders were given 2 hours to vent their anger and rage over, what to them is, an act of violence to their selves and the forest community that surrounds them. When Jenny Shattuck described workers trespassing in the night spraying their herbicides above her natural spring and subsequently delivering a child that has health complications for the rest of his life, you could feel the sense of horror and outrage coming from the “stakeholders”.

This hearing was a requirement to attain the industry certification MRC needs to keep their marketing campaign alive. There is a ballot initiative going around to make this procedure illegal in Mendocino County. We urge you to sign it. The fire danger alone is huge. Is MRC willing to carry the extra fire insurance their practices may cost landowners in property loss and environmental devestation. Look at the photos included in this article to see what is really happening in the forest.

Interested members of the public were invited to attend the stakeholder meeting on August 25th to provide input regarding Mendocino Redwood Company’s forest management as it relates to conformance to FSC-US Forest Management Standard (v1.0). To obtain a copy of these guidelines, please visit the FSC-US website:

Fogspinner-JudithHarwoodTellsMendocinoTVAboutBiochar246 from Terrence Vaughn on Vimeo.

Firefighters in Mendocino County filed a citizen initiative today to address the danger posed by millions of trees killed and left standing in the forest. 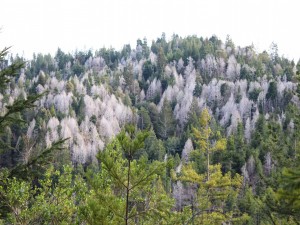 The timber industry in Mendocino County kills over one million “undesirable” hardwood trees each year and leaves them standing dead in the forest because they see it as the cheapest and easiest way to restore the more profitable conifers.

Retired CAL FIRE Air Attack Captain Kirk Van Patten observes: “In ten years of aerial wildland firefighting in Mendocino County, one of the most profound and troubling observations I made was the timber management practice of hack & squirt. This clearly has created a serious wildland fire threat for the firefighters and citizens of Mendocino County.” 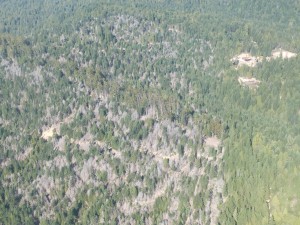 Dead standing trees ignite easier and burn hotter and faster, endangering everyone who lives near the dead zones. They also pose increased danger to firefighters who are called upon to respond to such fires. A dead tree burning is one of the most dangerous situations a firefighter can face, and that hazard increases exponentially as the number of dead trees rises.

Mike Coltan, volunteer firefighter, states: “Mendocino County’s rural residents are at greater risk of catastrophic wildfire due to standing dead timber intentionally left after hack & squirt, which greatly increases wildfire flame height, rate of spread, and fire line intensity. I am very concerned about community safety as well as the safety of my fellow volunteer firefighters.”

More than 200 residents and firefighters came before the Mendocino County Board of Supervisors on April 21, 2015, requesting action on this industrial practice. In spite of overwhelming public support, the resolution failed by one vote.

James Sibbet, another volunteer firefighter, says: “The practice of killing millions of trees over thousands of acres, compounded with leaving the dead trees as a fuel load for fire, after years of drought, is a clear case of human arrogance.” 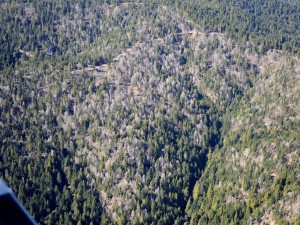 These four firefighters, along with Comptche resident Katy Tahja, are the proponents of this initiative. Once enough signatures have been gathered, this measure, which declares intentionally-killed-and-left-standing trees a public nuisance, will be on the June 2016 primary ballot.

Ms Tahja concludes: “It would be much nicer to not have to worry about having a standing dead forest in our backyards.”

Supporters of this initiative hope to finally achieve what the Mendocino County Board of Supervisors unanimously called for in a resolution twenty years ago: “Call an immediate halt to any practice which leaves large acreages of killed hardwoods standing but not downed.”

• BALLOT TITLE AND SUMMARY
• Shall the People of Mendocino County Declare Intentionally Killed and Left Standing Trees a Public Nuisance?
It is being proposed that an initiative be placed on the ballot that asks the voters to declare trees that have been intentionally killed and left standing, that are more than five meters tall and within 1,000 meters of specified “critical infrastructure”, be declared a public nuisance. The proposed initiative would make the “party responsible” liable for any resulting damage caused by the tree.
• Finally, the proposed initiative does not give “[t]he County the right to enter onto residential property to verify compliance.” The initiative must be adopted by a majority of the voters. Dated: July 27, 2015
s/DOUGLAS L. LOSAK Interim County Counsel County of Mendocino
•

The County shall not enter residential property to verify compliance.

Severability If any section, subsection, sentence, phrase or clause of this Ordinance is for any reason held to be invalid by a court of competent jurisdiction, such decision shall not affect the validity of the remaining portions of the Ordinance. The citizens of Mendocino County here declare that they would have adopted the Ordinance and each section despite the fact that one or more section, subsection, phrases or clauses be declared invalid.

Date of Effect This Ordinance shall take effect and be in full force immediately upon adoption by the voters of Mendocino County.

-NOTICE OF INTENTION TO CIRCULATE PETITION-
Notice is hereby given by the persons whose names appear hereon of their intention to circulate a petition within the County of Mendocino, California, for the purpose of qualifying a citizens’ initiative for the June 7, 2016 primary election, to be voted on by the voters of Mendocino County, California. The initiative states: Shall the people of Mendocino County declare intentionally killed and left standing trees a public nuisance? A statement of the reasons for the proposed action as contemplated in the petition is as follows: Many citizens, including firefighters, believe that the practice of intentionally killed and left standing trees presents an extreme fire hazard, impedes early rapid suppression of fires, and poses a life safety risk to firefighters and endangers the public health and safety of rural residents.