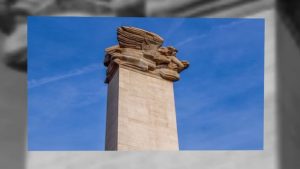 Filmed while on Vacation in Italy October 2015.

Mendocino TV tribute to the thousands of U.S. military personnel who made the ultimate sacrifice for their country

Mendocino TV thought this was an appropriate tribute to the thousands of U.S. military personnel who made the ultimate sacrifice for their country.
The American Battle Monuments Commission (ABMC), an agency of the U.S. federal government, manages America’s overseas cemeteries from World War I and World War II. This Memorial Day learn more about this agency that protects the memory of our fallen overseas.

The Florence American Cemetery and Memorial site in Italy covers 70 acres. The wooded hills that frame its western perimeter rise several hundred feet. Between the two entrance buildings, a bridge leads to the burial area where the headstones of 4,402 of our military dead are arrayed in symmetrical curved rows upon the hillside. They represent 39 percent of the U.S. Fifth Army burials originally made between Rome and the Alps. Most died in the fighting that occurred after the capture of Rome in June 1944. Included among them are casualties of the heavy fighting in the Apennines Mountains shortly before the war’s end. On May 2, 1945 the enemy troops in northern Italy surrendered.


Above the graves, on the topmost of three broad terraces, stands the memorial marked by a tall pylon surmounted by a large sculptured figure. The memorial has two open atria, or courts, joined by the Tablets of the Missing upon which are inscribed 1,409 names. Rosettes mark the names of those since recovered and identified. The atrium at the south end of the Tablets of the Missing serves as a forecourt to the chapel, which is decorated with marble and mosaic. The north atrium contains the marble operations maps recording the achievements of the American armed forces in this region.