Veterans for Peace on Mendocino TV Monday June 12 at 4pm.

In 1958 four Quaker peace activists sailed the Golden Rule toward the Marshall Islands to interfere with US nuclear bomb testing. This bold nonviolent direct action inspired a worldwide movement leading to the Partial Nuclear Test Ban Treaty of 1963. http://www.vfpgoldenruleproject.org/history/ 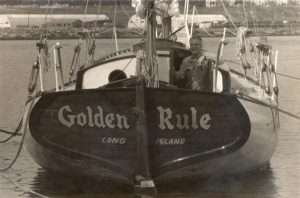 This spring the UN negotiations for a Treaty to Ban Nuclear Weapons are energizing the movement for nuclear disarmament, as is public concern about the very real possibility of nuclear war. Lynda Williams is a physicist, antinuclear activist, performance artist and physics professor at Santa Rosa Junior College. Her expertise is in nuclear power, weapons and missile defense. She is a board member of the Global Network Against Weapons and Nuclear Power in Space and an ally to Veterans For Peace. Lynda will give a brief overview of the nuclear state of the world and how a UN Ban on Nuclear Weapons can save the planet from an atomic catastrophe. Q&A follows.

A national project of Veterans For Peace, the Golden Rule is sailing throughout California to support the UN talks for a Treaty to Ban Nuclear Weapons.

Our most recent newsletter describing our organization and current activities.
http://www.vfpgoldenruleproject.org/wp-content/uploads/2015/05/Golden-Rule-Newsletter-Newsletter-May-2017-1.pdf