Elizabeth “Liz” Irwin died peacefully at home in The Woods on October 23, 2012, surrounded by loving family and a compassionate care giving team. 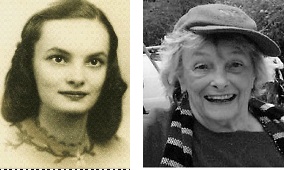 Born September 5, 1919 in Fort Pierre, South Dakota to Denny and Minnie Mills, Liz lived every day to the fullest. Growing up in South Dakota, she graduated from the University of Minnesota and the Colorado State College of Education.  It was there she met and married her husband Horace “Ace” Irwin, who she lovingly referred to in her newspaper columns as “The Joint Tenant”.  Liz and Ace were the proud parents of three children. She later pursued a Master’s Degree in speech from California State University, Northridge, teaching there and at Long Beach.

Retiring to the Mendocino Coast in 1971, Liz became an inspirational, dynamic force for change and social justice in this community.  Over the years she tackled tough issues from serving as the Director of the Bea Erikson Senior Center for over 7 years to ensure seniors received the services they needed, to a stint on the Mendocino Coast District Hospital Board of Directors to initiating Health Watch, a group that persuaded the County Supervisors to maintain health care on the coast by creating Mendocino Coast Clinics, where she was the first Board of

Directors Chair and served until 2004.  Liz motivated others with her sense of humor and radical, feminist spirit as she participated in the Gray Panthers, “Do-Gooders” Annual Luncheon and Old Broads for Peace.  Many on the coast will remember Liz for the many years she authored her inspirational “Coasting” column in the Mendocino Beacon and her childhood reminiscences in her book “Home of the Heart”.  Liz loved her small town upbringing in South Dakota and told her family she never felt entirely at home again until she moved to the Mendocino Coast.  And this community showed its love and respect for Liz by honoring her as Grand Marshal in both the Mendocino 4th of July and Paul Bunyan Days Parades.

Liz is survived by her husband of 70 years, Horace “Ace” Irwin and by her three children, daughter in law and two grandsons. Bill Irwin, an actor based in NY and married to Martha Roth, is the eldest son.  Patrick Irwin works in marketing and teaches meditation in Montreal and Nan Irwin is a jewelry designer living in New York.  Santos Irwin lives in New York studying photography and Wayman Irwin lives in Portland, Oregon attending Portland Community College. Both grandsons were able to visit their grandmother in the last weeks of her life.  Liz is also survived by her brothers Jack and Bob Mills as well as her precious four legged companion Rhodie.  Her sister Kathleen died 3 years ago.

She was cared for in the last two years of her life by her former daughter-in-law and gerontologist, Caitlin Morgan.  Ms. Nan Irwin, Ms. Morgan & Diana Nason (of Nason Caregivers) were at her side when she passed.  Throughout her journey, Liz and her family received invaluable assistance from the Mendocino Coast Hospice nurses.

The date for the celebration of Liz’s life is pending.  In lieu of flowers, donations may be made to Redwood Coast Senior Center or Mendocino Coast Clinics.

Bea Erickson Senior Center Fields A New Board of Directors