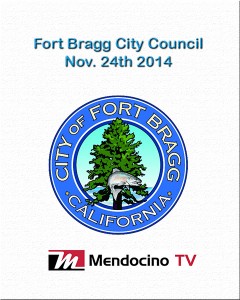 This week’s Fort Bragg City Council meeting was rather calm, given the high level of citizen participation since August and the fact that the results of the contentious election have finally been tallied. City Manager Linda Ruffing announced that prior to the next meeting there will be a reception to welcome new Council Members Lindy Peters, Mike Cimolino and Dave Turner while honoring retiring members Heidi Kraut and Meg Courtney.
Madeleine Melo, shared pictures from her recent trip to Sister City Otsuchi Japan, which was devastated by the Fukushima earthquake, where over 750 people, including 46 Council Members and City Staff lost their lives. Watch as Madeleine tours Otsuchi as it rebuilds itself from the ashes, including illustrating where Fort Bragg’s donations have contributed to its success.
Art and science will collide positively with economic development if Flockworks, the Noyo Marine Center and the City of Fort Bragg are successful in winning a matching $75,000 grant from the National Endowment for the Arts.
The Willits Transfer Station was a topic of discussion as a resolution was adopted to extend their contract until December 3, 2024 unless a new transfer station is built locally to replace the Caspar site.
An unaudited Interim Financial Report for FY 2013/14 and the Quarterly Financial Report for the First Quarter of FY2014/15 were presented and reviewed.
Public comments on non-agenda items brought forth a request for the City to explore free Wi-Fi downtown; information on a 2 day collaborative event on developing local ethanol gas from organic recycled waste and a request for a city council vote on the Main Street Realignment Project at their next meeting.
Also attending the meeting was the new City Attorney Samantha Zutler.
A Closed Session was held to conduct a performance evaluation for the City Manager, Linda Ruffing.
Post-election, the one fact all factions agree on, is that it was a positive leap forward when so many engaged citizens packed the City Council meetings as well as viewing and commenting online at Mendocino TV.
Watch this meeting, the Main Street Realignment Project work session as well as other newsworthy meetings and events at mendocinotv.com.