The Fort Bragg City Council Public Safety Committee meeting February 15th played to a full house as a more in depth exploration of the critical community concerns regarding the Mendocino Coast Hospitality Center (MCHC) after their presentation at the City Council meeting.  Since the City’s purchase of The Old Coast Hotel, to expand services for homeless and mentally ill people, tempers have flared as problems regarding the organization and its clients have increased. Until now there have been no forums to air or resolve concerns except for a failed, divisive ballot measure aimed at removing MCHC from that location.

The perception of many citizens and downtown merchants is that the numbers of people and damaging consequences have drastically increased resulting in negative impacts on businesses, the general public and the development of a tourism based economy. Mayor Lindy Peters, Councilman Bernie Norvell and city staff did an effective job of presenting information on the MCHC contract and conditions, communicating concerns they have received, the impact on law enforcement as well as structuring the meeting.

There is a laundry list of negative impacts on the local businesses compiled by City Manager Linda Ruffing including property damages, cleaning up garbage and feces, customer and staff harassment, safety and all manner of inappropriate behavior which have been voiced for three years with little resolution.  Councilman Norvell said one business has closed and others are considering shutting down as they are just exhausted by it all.  Reading the 40 pages of emails from one business over a four month period was exhausting and discouraging, although there was a glimmer of hope at the end with very recent improvements. 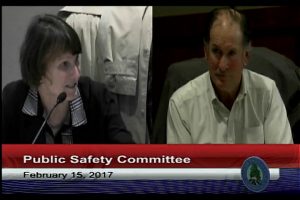 There is consensus that the Fort Bragg Police Department is working hard to balance the needs of the complainants and  people’s civil rights.  Their job is further complicated because the Mendocino County Jail will not accept detainees charged with misdemeanors, the mental health system is not always very responsive, the Mendocino Coast District Hospital (MCDH) Emergency Department is not equipped to deal with severely mentally ill patients and unless someone is an obvious danger to themselves or others, people are free to choose this lifestyle for themselves.  Sheriff Tom Allman, who spearheaded an almost successful initiative to build an appropriate facility, has said he will no longer have  his officers respond to many of these frustrating mental health calls.

Many different reasons, situations and circumstances bring folks to the streets of Fort Bragg, so you can’t lump homeless and/or mentally ill people together and apply cookie cutter solutions to either individuals or community problems. MCHC must provide services to homeless and mentally ill people for 20 years to honor the Old Coast Hotel agreement, which is a very broad mandate. People are angry because transitional housing does not have to be operational until October 2019, although at the Public Safety meeting there last year it appeared it would be opening soon. Others are upset about the opening of their café, although advertised to be functional shortly, is not required until October 2017.  There are also concerns about the publicly funded agency competing with private small businesses.  The café potentially does address the need for a training program which some folk are asking requesting. It was helpful to hear the legal requirements governing the building and potential City options should the organization fail.

As the City, the public and MCHC try to identify and clarify the problems, there is a tendency to identify issues with each building, program or client group.  Many onerous complaints are in the vicinity of either the Hospitality House or the Old Coast Hotel and can be characterized as being bad neighbors with littering, loitering and the like. The Extreme Weather Shelter (EWS), which provides a place to sleep in bad weather at participating churches, is both blamed for many problems and is requested to expand from all winter or all year.  Those clients generally use day services at the Hospitality House and board a bus to go to where ever the EWS is held that night. Since they do not have to be sober or participating in intensive services, which are required at the Hospitality House (HH), those clients are blamed for many of the problems.  They are targeted as people who just want to get drunk or high and not participate in changing their lives, which may or may not be true.  Given reports that have surfaced about the management and service delivery through MCHC, there may be rational explanations for people choosing to stay in the EWS or just eat, shower and wash at HH, rather than enrolling in more intensive care plans.  While the “troublemakers” are identified as being EWS participants or not in any MCHC program, it is evident those people at least eat at MCHC, so they are in fact their clients.

There are complaints that MCHC should only serve “locals” or“deserving people” who need help, not young “trimmigrants”, perpetual “drunks” or “druggies”, “inlanders” or “crazy people”.  Funding requirements are for “homeless and mentally ill services” and MCHC cannot set up artificial barriers to exclude the types of people who make any one of us uncomfortable.  And who would play God to determine which people are the “well deserving” people?

The issues regarding mentally ill people are particularly complex and complicated to address. While the public was very unhappy when Mendocino County Staff provided mental health services, it was horrible under the management of Ortner Management Group (OMG). It’s hard to see much improvement yet with the new provider Redwood Quality Management Company (RQMC) and both profitable businesses have contracted with MCHC to provide services. The intent of Mendocino County, in outsourcing mental health, was to provide better services with less money.  These companies pay much lower salaries than the County did, which has resulted in inadequate care and well lined company pockets. Furthermore, these programs require clients to sign case management plans and agreements which may require them to take prescription medications without regard to the potential dangers of those pills or consequences of combining them with self medications like drugs or alcohol. 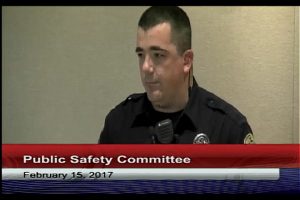 As Sergeant O’Neal pointed out, he just gets MCHC staff trained on how to work effectively with the Fort Bragg Police Department and then they are gone, replaced with new inexperienced employees. There appears to be high staff turnover at MCHC for a variety of reasons. While inadequate pay for difficult jobs is evident, there are complaints about staff being poorly trained and managed, rules and regulations for staff and clients not applied consistently as well as conflicts not being effectively resolved. Although it is incredibly challenging work at minimal pay for most staff, other citizens rail about these folks profiting off the backs of the poor. Many complain about the management salaries, however well qualified leadership costs money.  Every professional in this town is faced with expensive costs of living at generally much reduced income, a situation confronting all of us on the coast. 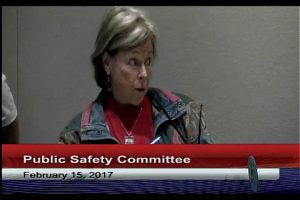 This entire inadequate system appears to have been dumped squarely on the coastal community without appropriate assistance from the elected officials and county administrators, who are responsible for disseminating the funding and hold ultimate accountability to assure suitable services are delivered.  Neither of the Coastal Supervisors, Dan Gjerde or Dan Hamburg, seem to be directly involved.  Supervisor Hamburg, who serves on the Behavioral Health Advisory Board, actively opposed the Mental Health Facility ballot measure and was opposed to the elimination the Ortner Management Group (OMG) contract.  There were no representatives from the Redwood Quality Management Company (RQMC), who were awarded the mental health contract without any prior adult mental health experience.  None of the Mendocino County Executives responsible for funding and contract oversight for these programs were present.  Fort Bragg is the only city in this county with year around services for homeless and mentally ill people, and there are reports “inlanders” are being sent here for help.  So, although the County  has a great deal of the ultimate responsibility, they are not participating in the problem solving process.

There are many more issues that need to be identified and resolved.  The more research Mendocino TV has done, the more that needs to be explored and exposed.  The Public Safety meeting was continued until March, when the citizens will have more opportunity to express themselves.  Hopefully, some of the responsible players from the County will be in attendance or involved. And perhaps more effective and inclusive representation from the Mendocino Coast Hospitality House, rather than just the President, an Assistant Director and “very part time” Therapist, will attend.  Mendocino TV will be researching, reporting and following this critical community concern.