Scott Schnieder has misappropriated over $70,000 in City of Ft Bragg Funds!

Throughout all negotiations between Mendocino TV and Linda Ruffing, she and the past ad hoc committee insisted the City of Fort Bragg has no intention of ever running the PEG station, while behind the scenes her assistant, Scott Schneider misappropriates the Franchise Fees. We think the subscribers of Comcast should know why their local television station has been absorbed into the misguided city tourism promotional behemoth being created by the City of Fort Bragg, Visit Fort Bragg. Watch as Scott Schneider tries to create the same business model that got him kicked off of VMC and read how Linda Ruffing manipulates City of Fort Bragg funds to accomplish her personal goals.

The Fort Bragg City employee, Scott Schneider redirected over $70,000 in City finances from what should have been from the City Clerk’s budget to finance building his own media empire. By claiming that his department spent the funds administrating the PEG station he was able to convince the two feeble minded city councilmen on the ad hoc committee that, even though he met only 3 times with the contractor, Mendocino TV, and sent 5 emails, his department spent over $70000 in administrative and actual expenses! He / They didn’t. Their only contact to the PEG facilities was when their IT tech pushed the button to broadcast the meetings live and sometimes got it right and pushed the other button to switch back to regular programming. Something a parrot can be trained to do but $36,596.90 billed in 2016 / 2017.  Compare that to the $30,000 paid to Mendocino TV for the complete job!

Watch as Dave Turner attempts to explain how the City would have to take money from General Funds to pay Mendocino TV and justifies the decision because the fees are theirs to spend as they see fit. What he neglected to mention was that in a closed committee meeting earlier, the ad hoc committee put $15,000 of the franchise fees into the General Fund which left them exactly  $15,000 short to meet our bid!

In the initial negotiations with Mendocino TV it was asked of Mendocino TV if we would also perform video production for Town Hall meetings. After in-depth investigation it was determined that the budget for Granicus, the City’s internet broadcast technology for recording minutes was derived from the city clerks budget and should not be spent for a completely different technology, broadcast television.

As a result we could not perform the tasks requested because that would have entailed spending taxpayers dollars subsidizing a private television audience. The funds available from the franchise were sufficient to run the channel but not anything else.

While waiting for the County of Mendocino to release subsequent disbursments, Scott came to our offices and pleaded poverty. He asked us to take a temporary 40% decrease in our payments, promising to make it up when the funds get disbursed.
We found out later that Scott had taken the funds that he didn’t ‘have’ and slipped it into his IT department budget. This came to light when a spreadsheet used by Scott for negotiating with the County of Mendocino for subsequent fee payouts showed a budget for over $70,000 during a period that Mendocino TV performed 100% of the PEG contract.

Three weeks previously we met with Linda Ruffing in which she assured us that “The City of Fort Bragg, in no way, wants to run a television station.” Scott told us that there was $62,000 available for the PEG contract, “Just wwrite your bid and we’ll meet to work out the contract”. Then Dave Turner joined the ad hoc committee. 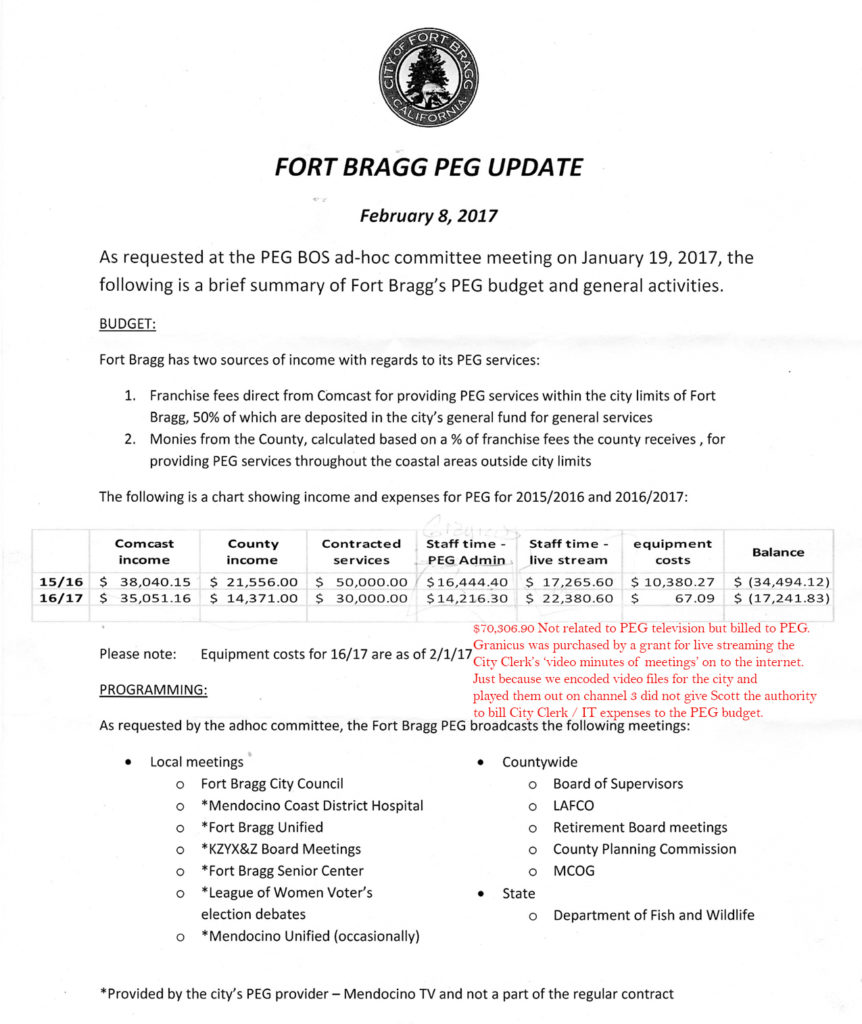 The last Ad Hoc meeting we attended was also attended by Michael Cimolino and Dave Turner, both City Council members. When we asked them about this massive reallocation of funding, they couldn’t explain it. Scott couldn’t explain the expenses either! The City Council members and Scott Schneider never reconvened another meeting but they did decide to bury the spreadsheet and never speak of it again.
So, where did the money come from and what was it really spent on? Ask Dave and Mike. They promised to get to the bottom of this but never did. Hold them accountable.
to be continued…….