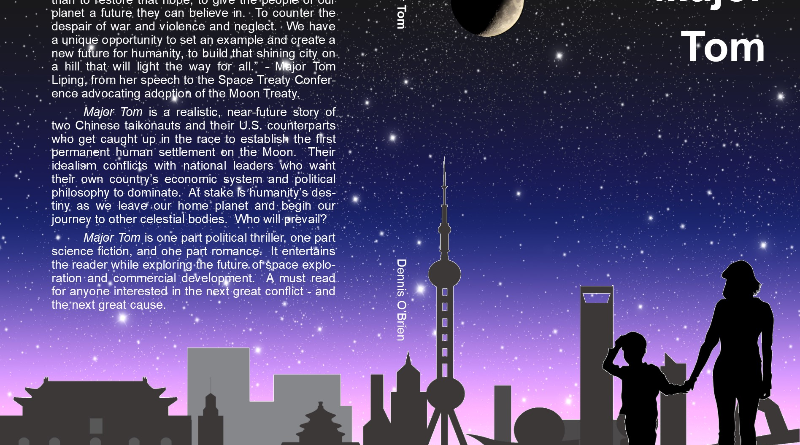 He will be part of a panel discussing space law and will focus on why the proposed Moon Treaty should be adopted by all nations.

The Congress (https://iac2018.org/) is an annual gathering sponsored by the International Astronautical Federation that draws government, industry, academic, and social leaders from around the world. The Moon Treaty, which applies to all the solar system except the Earth, has been proposed by the United Nations and adopted by several countries, but none of the space-faring ones. It requires nations to establish an international framework of laws before engaging in space commerce, particularly the mining of space resources. It also asserts that outer space is the “common heritage of mankind” and that legal decisions about the use of outer space must be made by humanity as a whole, not just one country.

Mr. O’Brien has recently published a novel that dramatizes the issues presented by the Moon Treaty. Major Tom, A Story Of Hope is one part political thriller, one part science fiction, and one part romance. It is a realistic, near-future story of two Chinese taikonauts and their U.S. counterparts who get caught up in the race to establish the first permanent human settlement on the Moon. Their idealism conflicts with national leaders who want their own country’s economic system and political philosophy to dominate. At stake is humanity’s destiny as we leave our home planet and begin our journey to other celestial bodies. Who will prevail?

These issues have recently come to the forefront. The United Nations has just announced its first Conference on Space Law and Policy, to be held in Moscow in September (see http://www.unoosa.org/oosa/en/ourwork/spacelaw/first-united-nations-conference-on-space-law-and-policy.html). Conversely, the U.S. House of Representatives has just passed a bill that unilaterally grants property rights for outer space resources to any U.S. citizen or corporation that gets there first. The conflict between nationalists and internationalists is coming into focus. The events predicted in Major Tom are already starting to happen.

Mr. O’Brien has also founded The Space Treaty Project and has started an online petition calling for ratification of the Moon Treaty. For more information about the Project, the paper being presented at the IAC, a link to the petition, and a link for purchasing Major Tom, please visit www.spacetreaty.org. All proceeds from the book will be dedicated to the Project. The Space Treaty Project is fiscally sponsored by Cloud Forest Institute (www.cloudforest.org).

Questions and requests for local presentations can be submitted to dennisobrien@spacetreaty.org.

Much has happened in the last two months.

In March my article on the Moon Treaty was published in The Space Review (http://www.thespacereview.com/article/3444/1). I submitted an abstract of the article to two international space conferences, and both have invited me to attend and present it. The Committee on Space Research (COSPAR) will be holding its 42nd annual assembly July 14-22 in Pasadena at Caltech, home of the Jet Propulsion Laboratory (https://www.cospar-assembly.org/). I will be hosting a “poster presentation” there, engaging with the delegates though not speaking on any of the technical panels. I will be speaking as part of the space law panel at the International Astronautical Congress when it holds its 69th meeting in Bremen, Germany, October 1-5 (https://iac2018.org/).

I also attended a space law conference last month that was part of the annual Space Symposium in Colorado Springs. My article on the conference (Space Law 2018: Nationalists vs. Internationalists) was also recently published in The Space Review (http://www.thespacereview.com/article/3482/1).

I am an internationalist who supports ratification of the Moon Treaty. The Treaty, proposed by the United Nations but not yet ratified by the space-faring nations, calls for the creation of an international framework of laws that will provide certainty for business investors while requiring that space activities “shall be carried out for the benefit and in the interests of all countries, irrespective of their degree of economic or scientific development.” (For the full text of all space treaties, go to
http://www.unoosa.org/res/oosadoc/data/documents/2017/stspace/stspace61rev_2_0_html/V1605998-ENGLISH.pdf.) I have recently started an online petition calling for ratification of the Moon Treaty by the United States Senate. Though the current Senate would not do so, it’s composition will likely change with the November elections. So far 155 people have signed. Not a bad start, but many more signatures are needed.

There are three ways you can help:

1. Sign the Petition and share it with your friends/contacts. Go to http://www.spacetreaty.org/ for more information and the link to sign. The more signatures, the more credibility I will have when asking people to support the Moon Treaty. Alas, change.org, the platform for the petition, charges a fee to distribute it, so I need your help to reach more people.

2. Buy the Book. Major Tom is a novel I recently published that dramatizes the current issues in space law and commerce. It is entertaining, informative, and perhaps even inspiring. The online version is only $.99, the lowest price possible. The print version is $8.95 plus shipping, which can be free if bundled with other orders. All proceeds from the book will be dedicated to the Project. For more information and a link to purchase, go to http://www.spacetreaty.org.

The mission of The Space Treaty Project is nothing less than to restore humanity’s hope for the future by providing an alternative to the wars, violence, and neglect that have dominated our history. We have a unique opportunity to set an example and create a new future for humanity, to build that shining city on a hill that will light the way for all. As Klaatu reminded us, the choice is ours.

Thank you for your interest and support