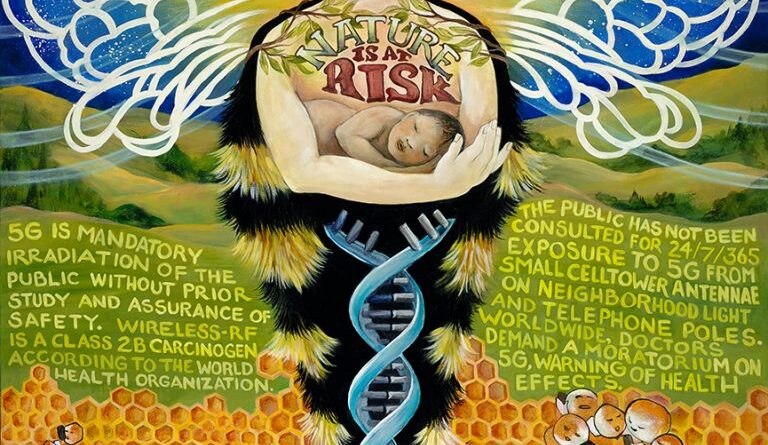 INTERNATIONAL APPEAL WILL BE DELIVERED TO GOVERNMENTS AROUND THE WORLD signed by scientists and doctors from 202 Countries and Territories.

THE ISSUE: MICROWAVING OUR PLANET
While the media’s attention with regard to environmental issues has been captured by climate change, fracking, and plastics in the ocean, an International Appeal to Stop 5G on Earth and in Space has been quietly making its way around the world. Signed by 4,800 scientists, 2,800 medical doctors, 770 beekeepers, 2,000 environmental organizations, and 180,000 others from 202 countries and territories, this Appeal calls on the world’s governments to stop the deployment of 5G.

On January 25, 2020, environmental groups are planning events in 31 capital cities so far, with more being added daily. Their goal is to stop the deployment of millions of 5G antennas on Earth and 50,000 5G satellites in space, and to secure emergency high-level meetings with officials in governments and international governmental organizations including the European Union, the United Nations, and the World Health Organization.

The issue is microwave radiation, which has been steadily intensifying for over two decades courtesy of the wireless revolution. 5G will bring a huge increase in radiation, virtually overnight, everywhere—in cities, suburbs, parks, nature preserves, wildlife refuges, oceans, Greenland, and Antarctica. Instead of cell towers every few miles, there will be cell towers—small but powerful—in front of every third to fifth home. Instead of 2,000 satellites orbiting the Earth, there will shortly be 50,000.

The organizers of the events of January 25, 2020 include people who have already been so severely injured by wireless devices that they can no longer participate in society at all. They are fighting for their own lives, the lives of their children, and the lives of the insects, birds, animals, and all of us.

LOCAL ACTION: Information about Wi-Fi/5G
To raise awareness locally Helen Sears will during her workshop on Saturday 1-18 from 3-5pm at the Community Center of Mendocino give an overview of what Wi-Fi/5G electromagnetic radiation is, what risks are known, how we can minimize the damage and protect ourselves.
The Community Center is located at 998 School Street in Mendocino. A nominal fee will cover rent and handouts. For questions contact Stop 5G Mendocino at <stop5gmendocino@mcn.org>