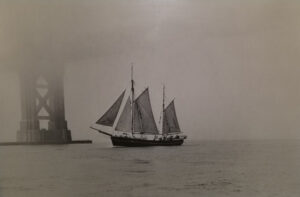 The Voyage of the Sailing Vessel FRI Began with a Dream

Last season’s exhibit at the Kelley House Museum, “Wind & Water: the Nautical Collection of Norman de Vall” showcases antique charts, old navigational instruments and other sea-going items gathered over the years by one of our coastal residents. However, Norman is not just a collector; he is also a master sailor.

By the time he was 27, he had spent three years in the Oakland ship yards in the preservation of historic ships such as C.A. Thayer, Steam Schooner Wapama, Ferryboat Eureka, and Scow Schooner Alma. He worked as a tugboat deckhand, a stevedore superintendent, and earned a B.A. with a Minor in Ocean Transportation.

It was during these shipyard experiences that he dreamed and then envisioned buying or building a sailing cargo ship commemorating historic values and international trade.

His dream was brought into focus in November of 1967 as he wandered the docks and backwaters of Scandinavia as a representative for potential buyers of small vessels. There in Aalborg, Denmark, he found the sailing vessel Fri. Her price was 75,000 kroner, or about $8,000. For 1 percent, or $80, he was able to secure a 30-day option. Twenty-nine days later he owned the ship.

For the next nine months his volunteer crew, including a number of teenagers, removed the wheelhouse, re-routed her engine controls, installed a crew quarters forward of the mast, replaced bad wood and got Fri (pronounced and meaning “free”) ready for sea.

At the same time, he was visiting prospective shippers, and soon booked an unusual cargo of Tuborg beer, Drambuie liqueur, Cherry Kiaffa Wine, Guinness stout, Asp Holmblad candles, and Avon inflatable dinghies. Rolex donated a watch for navigating, Chevron the fuels and International Paint company all the necessary coatings. (Prior to departure a Tuborg spokesperson said that if the ship went down they would get more publicity.)

Finding a crew to take Fri and her cargo from Denmark to San Francisco was achieved by placing an ad in the Herald Paris Tribune. It said “No Job, All Work.” He had over 100 applicants. The final roster included three Germans, an Aussie, a Kiwi, and two Americans including a doctor, a shipwright, two deckhands and a watch captain.

The trip had its challenges — broken spars, torn sails, calm winds, and a near foundering near Puerto Rico needing underwater repairs. But they entered San Francisco Bay 50 years ago almost to this day and delivered the Key to the City of Edinburg, Scotland, to then Mayor Alioto.

For the rest of the story, join us at the Kelley House Museum on Sept. 12 at 4:30 PM when Norman will spin more sea yarns for the latest installment of our local history series, “Sunday Afternoon With . . .” Admission is $7 and $5 for Museum members. Memberships are available at the door. Call 707/937-5791 or contact us at info@KelleyHouseMuseum.org. We are located at 45007 Albion Street, Mendocino, one block north of Main Street.

Mendocino Historical Review Board May 6 2019

Norman de Vall discusses his background and experience arriving to the Mendocino Coast in the early Sixties.