On Tuesday, August 6th, neighborhoods throughout Fort Bragg are being invited to join forces with thousands of communities nationwide for the “29th Annual National Night Out” crime and drug prevention event.

National Night Out, which is sponsored
by the National Association of Town Watch (NATW) and co-sponsored locally by the
Fort Bragg Police Department, will involve over 15,325 communities from all 50 states,
U.S. territories, Canadian cities and military bases around the world. In all, over 37.1
million people are expected to participate in “America’s Night Out Against Crime”.

National Night Out is designed to:

(1) Heighten crime and drug prevention awareness
(2) Generate support for, and participation in, local anticrime efforts
(3) Strengthen neighborhood spirit and police-community partnerships
(4) Send a message to criminals letting them know neighborhoods are
organized and fighting back.

Residents in neighborhoods throughout Fort Bragg and across the nation,
are asked to lock their doors, turn on outside lights and spend the
evening outside with neighbors and police.
The Fort Bragg Police Department is currently aware of four neighborhood block parties.
One of the parties will be at the Police Department on Cypress Street.
Come by between the hours of 5:00 and 8:00p.m. and create your own Free ice cream sundae!
National Project Coordinator Matt Peskin said, “This is a night for America to stand
together to promote awareness, safety and neighborhood unity. National Night Out
showcases the vital importance of police-community partnerships and citizen
involvement in our fight to build a safer nation. On NNO, we invite neighborhoods
nationwide to join us in Giving Crime & Drugs A Going Away Party.”
For additional information or if you would like to be involved in this event,
contact Chief Mayberry of the Fort Bragg Police Department at 961-2800 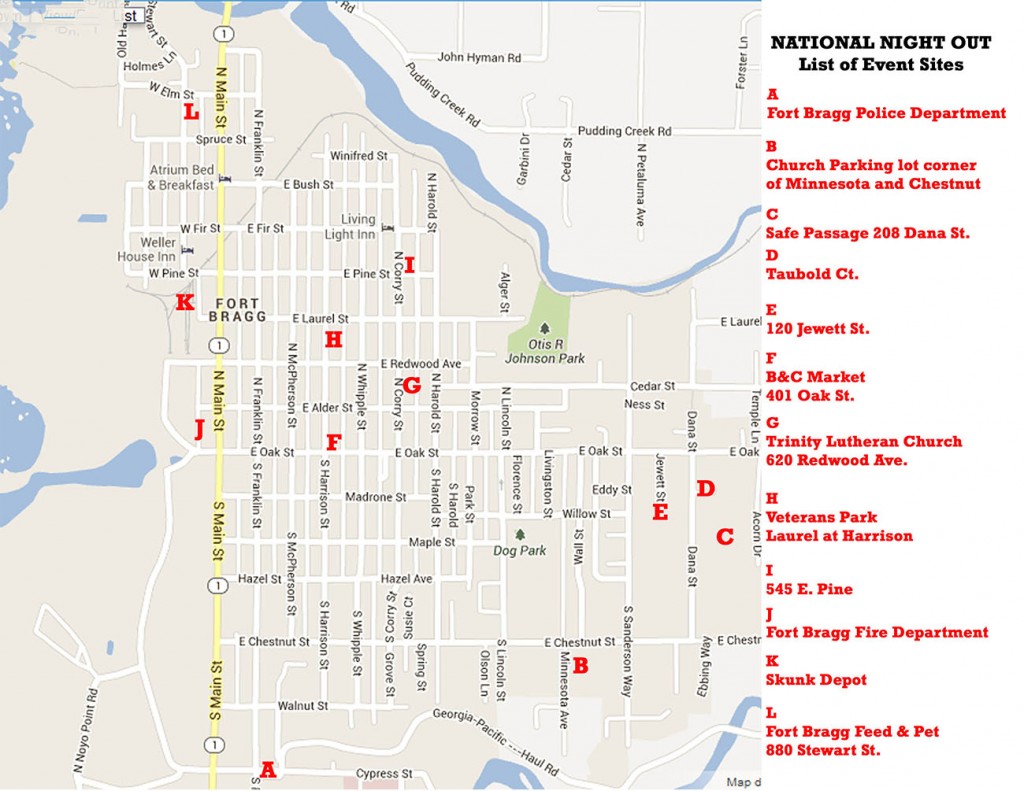 Timberwolves’ Coach Perkins talks about the season with Lindy Peters