To ensure the Navy accomplishes its mission to maintain, train, and equip combat-ready military forces capable of winning wars, deterring aggression, and maintaining freedom of the seas, the Navy proposes to:

The Proposed Action would ensure the Navy accomplishes its mission to maintain, train and equip combat-ready military forces capable of winning wars, deterring aggression and maintaining freedom of the seas. This mission is achieved by conducting realistic training and testing activities in the Pacific Northwest. The Navy’s Proposed Action and alternatives will be evaluated in the NWTT EIS/OEIS to assess potential environmental impacts from proposed training and testing activities. 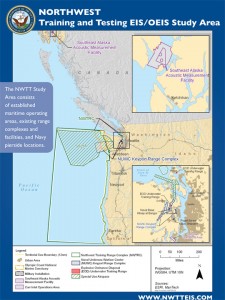 The National Environmental Policy Act (NEPA) requires federal agencies to evaluate a range of reasonable alternatives to achieve the purpose and need of the Proposed Action. Two “action” alternatives (Alternative 1 and Alternative 2) that meet the Navy’s purpose and need are currently under consideration. Analysis of a “no action” alternative is also required. These alternatives, and other reasonable alternatives identified during the scoping process, will be analyzed to help determine the appropriate level and type of training and testing activities to meet the Navy’s requirements.
No Action Alternative
Under the No Action Alternative, the Navy would continue current training and testing activities as defined by existing environmental planning documents, including the Northwest Training Range Complex EIS/OEIS and the Naval Sea Systems Command Naval Undersea Warfare Center Keyport Range Complex Extension EIS/OEIS. The baseline testing activities also include other testing events that historically occur in the NWTT Study Area (see Figure 1) and have been subject to previous analysis pursuant to NEPA and Executive Order 12114. Analysis of the No Action Alternative provides a baseline, enabling decision makers to compare the magnitude of the environmental effects of no action (current activities) to the effects of the action alternatives. Baseline activities do not include training with sonar in Puget Sound.

Alternative 1 includes some activities that were not analyzed in previous documents. New activities being considered include:

Alternative 2 includes all activities in Alternative 1 plus adjustments to the type and level of training and testing activities. Under Alternative 2, sink exercises would be eliminated.
Environmental Resources to be Analyzed
Some of the environmental resource areas and issues to be studied in the NWTT EIS/OEIS are listed below. The public is encouraged to provide input on these or other resource areas for consideration in the Draft EIS/OEIS.

Forum on Measure U on Naturally Mendocino