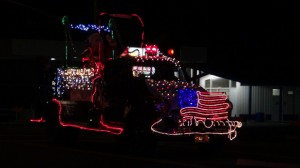 Formerly known as the Lighted Truck Parade, this event reaches back into the town’s timber industry past. While the focus of the parade today has changed, and the scope broadened, it is important to remember the origins of this holiday ritual. Lighted truck and tractor parades were common in rural American towns, and helped to celebrate the end of the working year. But after protests against the logging industry on the Northern California coast, the event was rechristened the Holiday Lights Parade.

This year’s parade followed the lighting of Fort Bragg’s official Christmas tree and a visit from Santa Claus, which started at 5:00P with Santa’s arrival.

Caroling began at 6:00P followed by the tree lighting and the parade at 7:00P. The parade followed a route from west Pine Street’s judging area, to Franklin Street, to Oak Street and then on to Main Street to complete the circle back to Pine. Viewing was possible along the entire route, with prime seats staked out early across Main Street from the Guest House Museum and the Christmas tree. 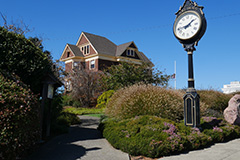