I would like to clarify the situation regarding Mendocino Coast Media and Mendocino TV.

The City of Ft Bragg decided to not renew our, Mendocino TV, contract to administer Channel 3 /PEG for the upcoming 2017 – 2018 year. Violating all of their promises to the community, The City of Fort Bragg is now running a fully functional Government Access Television Station

The City of Ft Bragg took a large part of the $62,000 franchise fee from Comcast, $15000, which is paid to provide public access on the Mendocino Coast and transferred it into their general fund and then declared that they didn’t have enough money to meet our contract estimate. These $62,000 franchise fees are funds paid by the subscribers of Comcast for Public Access TV to ensure Public Access Television would be available to subscribers of Comcast TV only and are marked as such on the subscribers bill. This service is not available to anyone but Comcast CATV subscribers, a small group, approximately 3800 – 4000 on the Mendocino Coast.

In these days of 4G LTE, Netflix, Satellite service, Youtube and Mendocino TV, most people don’t subscribe to CATV.

The city is now in the process of absconding the franchise fees to create a Government Access Television Station.

$62000 was disbursed by the County of Mendocino as the portion they determined was the coast’s allotment from the Comcast yearly disbursement. The city still owes Mendocino TV for $1995 in software expenses and we bid $60,000 to administer the franchise.
When Dave Turner, the new member of the ad hoc committee, questioned what they get for the bid.
We explained to him the existing services provided by Mendocino TV administering the franchise in the previous year.

The city never met the basic terms of their contract. They never:

We also showed the committee a spreadsheet used by the Administrative Services Director Scott Schneider which that the City Had $62,000 expenses for channel 3 administration by Scott’s IT department for $70,306.90 on top of the contracted fee paid to Mendocino TV of $80,000. I explained that we had e-mails between us but that was the extent of our contact. Mendocino TV performed every function related to PEG and more not the IT department which was funded from the City Clerks budget.!  Nobody could match up Scott’s claim that those expenses represented his offices administrative expenses of $70,306.90 when he never, ever worked on it and his staff obstructed us through ineptitude and lying.

My point was to illuminate that we agreed to take a 50% reduction with the understanding that we would be reimbursed when the County Franchise Fees were disbursed. During the time of July 2016 to July 2017 we were reimbursed at 60% of our previous rate while the county negotiations carried on. Meanwhile Scott Schneider was billing $36,596.90 to his city budget as if his IT staff was involved with the administration of the PEG television station.

Scott, Michael and Dave huddled over the spreadsheet of Scott’s and started making random guesses as to what the money Scott was billing to his city budget represented and Scott couldn’t supply a cogent answer so we agree to retire the ad hoc meeting until Scott explained what the extra $72,000 represented. That was the last time we ever heard from the City until we were noticed 2 days before the May City Council meeting that the City was taking the PEG over.

When the City of Fort Bragg was attempting to rejuvenate the PEG they produced a Requests For Proposals (RFP) that we did not bid on. We declined to bid. The city found themselves with the lowest bid approaching $100,000 a year at the end of the bidding period. The RFP expired.City admin staff made overtures about a private contract outside of the RFP process with Mendocino TV.

We felt uncomfortable with that arrangement because we felt the PEG belonged to the Footlighters and were surprised that the city could legally circumvent the RFP process and negotiate the contract with no public review or input. We declined their overtures 3 times…………

Crave Skincare at the Emerald Exchange 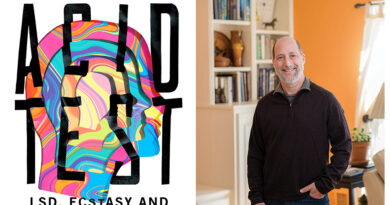