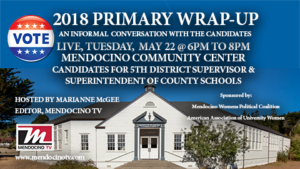 Chris Skyhawk has an extensive history of actively participating in social justice issues, the environment and community  development as both paid staff and as a volunteer.  Living in Albion, Chris  has been active in many of the same issues as Ted Williams and is also concerned with the public safety problems associated with excessive standing fuel, while timber companies add to the dead trees that may potentially feed a horrendous fire.  His varied experience and networking has given him exposure to many coastal organizations as well as County government, which appears to have contributed to his large number of official endorsements, some of which stirred controversy.

Chris’ platform basically follows the concerns of all the candidates including affordable housing, environment, public safety, economic development and the problems that are currently vexing the newly legalized cannabis industry.  His professional and volunteer experiences have already put him in the loop with the many different organizations and people associated with the many issues on these areas that are challenging this County.

While Chris initially faltered in his Job Interview on the Mendocino TV’s ” Naturally Mendocino”, he appears to have been a quick learner and become more at ease with the new processes we have initiated as an avenue for constituents to actively engage with the 5th District Candidates.  Mendocino TV conducted a mock governance exercise, where all the candidates discussed and made proposals, role playing the Board of Supervisors, regarding the implementation of Measure B, the sales tax dedicated to funding mental health facilities.  Mendocino TV was impressed when, days later, Chris attended and testified at the Measure B Citizen’s Oversight Committee meeting, showing that he earns from his experiences and does actively engage in community issues, searching for a more informed approach. Kudos to you Chris.

Chris has been the candidate that has shown the most growth in the campaign, to the point where, now, he has a much more nuance and expanded platform from when he started campaigning. The endorsement by SEIU is a double edged sword. Chris will be representing the Voters when dealing with the union in upcoming negotiations. Unions have a problem with representing public employees. The management (5th District Sup.) is beholding to the public tax payer to keep expenses down. Chris will find himself in a curious position should he win the election.

Chris Skyhawk, like the other four 5th District Candidates, would make a fine supervisor, in my opinion.